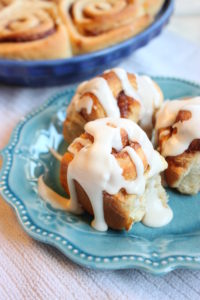 Boy, I could really go for one of these homemade cinnamon rolls right now. They’re so fluffy, sweet, and…addicting. It’s this third reason that I don’t make them very often. I could eat the whole pan myself. But when there is a special occasion on the horizon or I am trying to bribe my husband into doing a project for me, I bust out this recipe that hasn’t failed me yet. Truth be told, they are a little time consuming, but it is SO worth it in the end when I sink my teeth into that sweet cinnamon sugar! 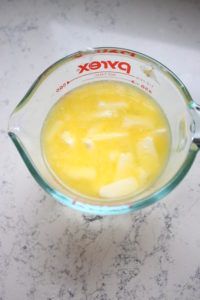 The first step in making these fluffy cinnamon rolls is to combine 1 1/2 cups of water and 6 tablespoons of butter in a microwave-safe bowl. I find that using Imperial butter (which is actually half butter and half shortening) works better than regular butter. The butter gives it flavor and the shortening gives it structure…the best of both worlds when you are baking! Microwave that on 15 second increments until the water is really warm but not burning. It will probably be around 120 degrees and the butter may not melt completely. 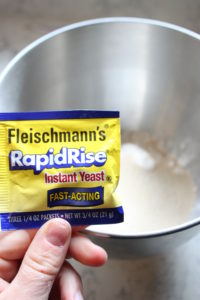 Now, in your standing mixer bowl, combine 2 cups of all purpose flour and 1/3 cup of white sugar. Pour in 2 packets of rapid rise yeast (this is a must) and 1 teaspoon of kosher salt. Mix that on low speed using your bread dough attachment.

Fleischmann’s Bread World is where I adapted this recipe. Not only do they have sweet breads, but all sorts of savory bread recipes as well. You should check them out if you have a chance. 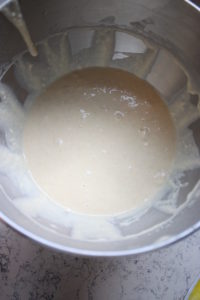 Now add the butter mixture to the flour along with 1 egg. Beat this mixture for 2 minutes on medium, occasionally scraping the bowl. Add another cup of flour, beat the mixture on high for 2 minutes, and scrap the bowl every once in awhile. Add just enough remaining flour (maybe 1/2 cup or a little more) until the dough forms a ball. 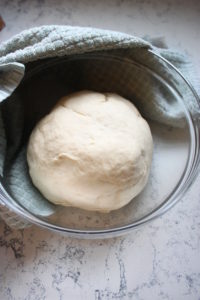 On a flat floured surface, knead the dough for about 8 to 10 minutes. The dough will be finished when it is soft and elastic. You can also press two fingers into the dough and if the indentations spring back, the dough is ready. Put the dough in a large bowl, cover it with a towel, and let it rest for 10 to 15 minutes. 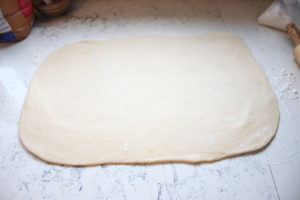 Once the cinnamon roll dough has rested, roll it out into a rectangle shape. It should be about 15 inches long and 10 inches wide. 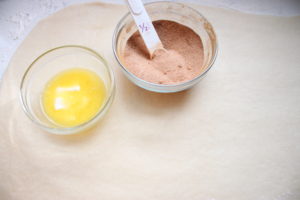 Combine 1/3 cup of sugar and 2 teaspoons of cinnamon in a small bowl. In a separate bowl, melt 3 tablespoons of butter. 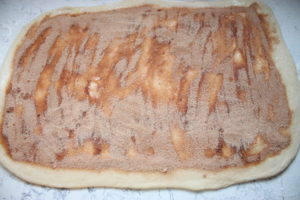 Use a pastry brush to spread the butter onto the dough, but leave 1/2 inch of space around the edges. Then sprinkle the cinnamon sugar on top and pat it down.

Then roll the cinnamon rolls up length wise and pinch the seam shut. 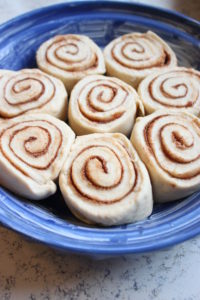 Cut the long roll into about 12-14 evenly shaped cinnamon rolls. Place them in two greased pie plates or a 13×9 glass pan. 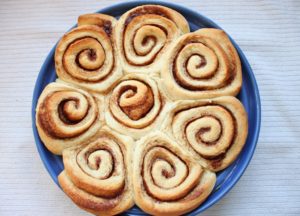 Once these puppies are baked, you’re going to want to frost them right away! 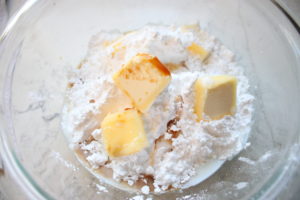 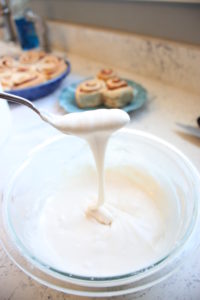 The frosting should be thick and creamy but still drizzle easily. 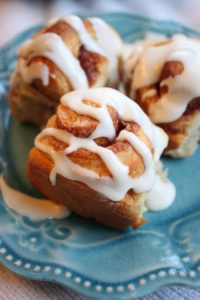 Here’s the finished product! Don’t you just want to sink your teeth into one right now?! 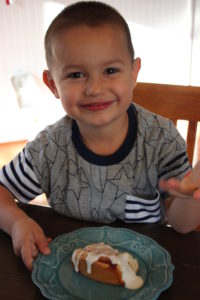 My little Caleb did! He good barely wait for me to get the frosting on before he started licking it up with his fingers. 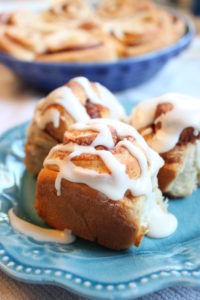 The best part to these fluffy homemade cinnamon rolls is that they stay good at room temperature in an air tight container for a couple of days. Well, that is if you can keep your family out of them. My kids are like a swarm of locusts. They come i buzzing right when the food is done and leave nothing but a trail of crumbs on their way out. 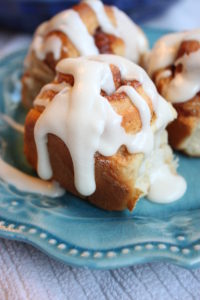 Just imagine the looks when you serve this at your next book club, mom’s night out, or family brunch! You’ll be a hero! 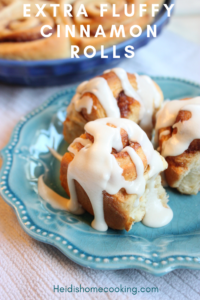 I have another homemade cinnamon roll recipe adapted from the Pioneer Woman that is really good as well. It is milk-based and made with brown sugar. And if you are really into baking, you may also like to try my Nana’s Lemon Bars or my Extra Fluffy Blueberry Muffins. For more ideas, check out my Recipe Index or my Pinterest boards. Happy cooking y’all! 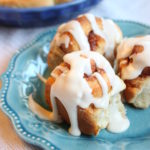