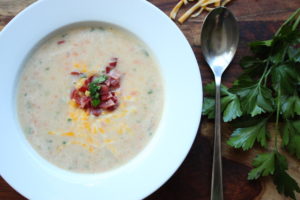 In the culinary world, I most look up to Ree Drummond on the Pioneer Woman. Not just because she makes amazing food, but because she does it while juggling a busy life on a ranch, homeschooling her children, and running a business. I have been watching her from the beginning and have never had a recipe of hers I didn’t like. This recipe for Potato Cheese Soup is originally from her, but I made a few substitutions to keep the soup on the healthier side. Even with a few modifications, this soup still has deep flavor and a creamy kick. And what I love most? It is freezer friendly, making my life easier and conveniently delicious. 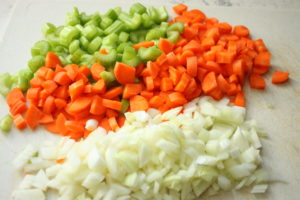 First, you will need to dice up 3 carrots, 3 celery stalks, and a medium sized onion. Try to make them all of uniform size so that they will cook evenly. 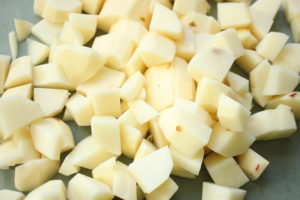 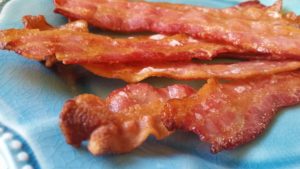 Next, prepare your bacon. Ree’s recipe calls for frying the bacon in the same pan as you’ll make the soup in so that you can use the grease as your cooking and flavoring agent. I have made the soup that way and it is phenomenal! But if you want to save a few calories, make your bacon (or even turkey bacon!) in the oven using the Easy Clean-up Oven Cooked Bacon recipe. All the grease will drip to the bottom and you’ll be left with nothing but crispy pieces to chop up for the topping on your potato cheese soup. I did this with turkey bacon and didn’t regret it! 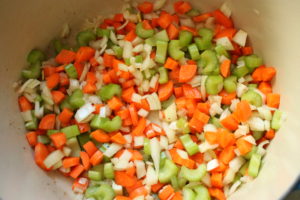 Set the bacon aside and cook up the vegetables. If you cooked the bacon in the same pot, keep the grease and throw in the vegetables and cook on medium to high heat for about 3 minutes. Use olive oil if you’re cooking the bacon another way. 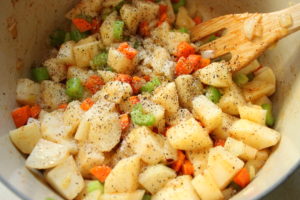 Add in the potatoes, 2 teaspoons of Creole seasoning, and a 1/2 teaspoon of Kosher salt and a pinch of pepper. Let it cook for about 5 minutes. 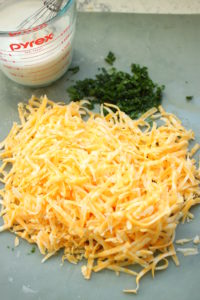 Meanwhile, get to grating a cup of Colby Jack cheese. You will also need a teaspoon of minced parsley and a slurry made of 1 cup of milk and 3 tablespoons of flour.

My friend Candice was the one who had me try this soup first. I remember the cold February night I spent at her house when my husband and I were on a house hunting trip to Knoxville. It was about 20 degrees outside and we were seriously doubting whether our warm California blood could handle a Tennessee winter. Candice pulled out all the stops and served us this potato cheese soup in her warm kitchen. The soup and her hospitality won us over and we moved to town a month later. 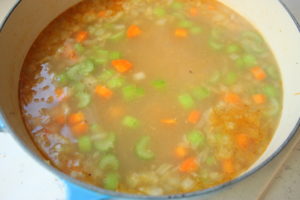 Head back to the vegetables to add your 8 cups of reduced sodium chicken broth. Bring the broth to a gentle boil and then let it cook until the potatoes are tender. It will be about 10-12 minutes. When that is finished, pour in the slurry you made and allow the potato cheese soup to thicken for another 5 minutes. 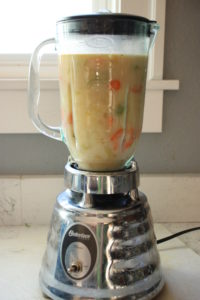 When the potatoes are tender, ladle portions of the potato cheese soup into a blender or food processor. Blend it until it is smooth and then pour it into a new pot. Process the rest of the soup the same way. 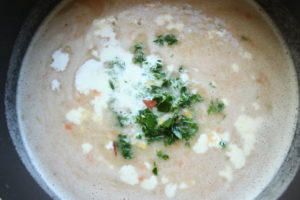 Heat up the pureed potato cheese soup slowly and add in 1/2 cup of heavy cream and the parsley. You may want to test the soup at this point to see if it is lacking any seasoning. 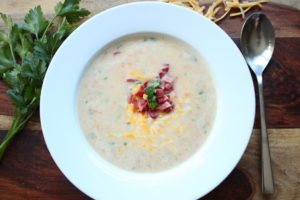 Ladle portions into nice big bowls and top with a handful of the grated Colby Jack cheese. Chop up your bacon and sprinkle that on top as well.

Candice also made this recipe at our homeschool co-op’s Crockpot soup day. Every family brought a slow cooker full of soup to share and we had a blast trying everyone’s recipes. I brought Hearty 3 Bean Vegetarian Chili but since about 12 other people also brought chili, it was totally overrated and unexciting. I went back for Candice’s soup twice! 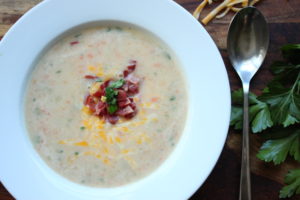 This potato cheese soup has a real depth of flavor. There are so many rich and creamy elements that your taste buds can’t get enough! 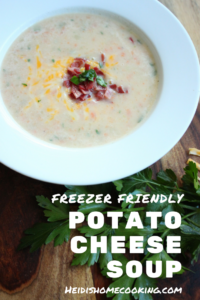 The best part about this meal is that it can be frozen. I made this soup for a friend who had knee surgery. She was able to have a fresh bowl the night I delivered it and then freeze the rest for another time. To thaw, simply heat it in a pan until smooth or let it thaw in the fridge over night. I freeze it in a ziplock bag and thaw under warm water. I love the kind of meals you make once and eat twice! For more soup ideas, check out my Recipe Index or follow my slurpable soups board on Pinterest. Happy cooking y’all! 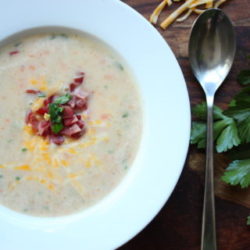 Heidi Davison
Potato Cheese Soup is full of deep flavors but smooth and creamy. It is the perfect meal to warm you from the instead out. It freezes well so it is worth making a double batch!
5 from 2 votes
Print Recipe Pin Recipe
Prep Time 30 mins
Cook Time 30 mins
Total Time 1 hr
Course Soup
Cuisine American
Servings 6 -8

12 Easy Dinners with 6 Ingredients or Less

How to Make Easy Chicken Fajitas