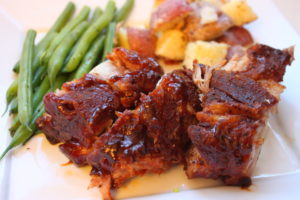 Baby-back ribs, you say? In the Crockpot? Isn’t that like, sacrilegious? No, no it’s not and let me tell you why. What is a rib lover looking for in the perfect rib?

This recipe gives you all that without setting up a smokehouse, using a billion ingredients to make your own rub or sauce, or making a mess in the kitchen. It’s the best of both worlds! My rib-loving husband was happily surprised by this recipe and I think you will be too! 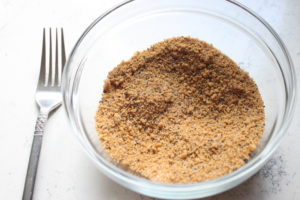 This is a super simple rub that only requires 4 spices! You probably even have them on hand already. How is that for easy?

Mix these altogether in a small bowl, using a fork to break up any chunks and make sure it is mixed thoroughly. 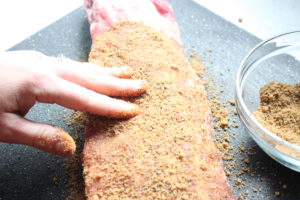 Get out your trusty rib rubbers (aka your hands!) and smother the ribs in the rub on both sides. Press the rub into the meat on all sides. 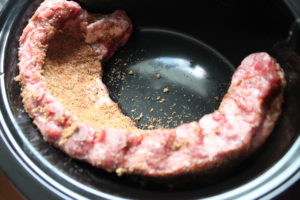 Now put the baby-back ribs into the Crockpot with the meaty part of the ribs facing the wall of the slow cooker. This is important to do because it will ensure that the meat gets cooked thoroughly. Set the slow cooker on LOW. If you don’t have a slow cooker yet, you really should get one! It will change your cooking life! 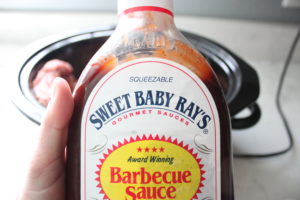 Now grab your favorite BBQ sauce. Maybe you have a favorite BBQ joint in town that bottles their sauce: go get it! Find a sauce that you just can’t get enough of. The kind of sauce that makes you want to lick your fingers AND your plate! But in case you’re out of ideas, store-bought BBQ sauce is perfectly fine. In fact, I like Sweet Baby Ray’s and it’s fairly inexpensive. 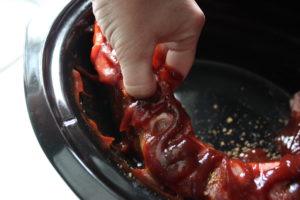 Pour 2 to 3 cups of your favorite sauce onto the ribs, dousing them on all sides. Make sure there is plenty of sauce between the meaty ribs and the wall of the Crockpot so that the meat won’t adhere to the pot and burn. Cover and cook the ribs on LOW for 7 hours. If possible, continue to coat the ribs with the sauce (it is cooking in) throughout the 7 hours to keep the meat as moist as possible. 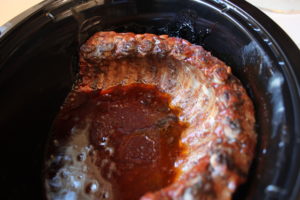 When the ribs are done, they should be nice and brown around the edges. If you insert a knife between the bones, the meat should fall off without any effort. If you would like to caramelize the sauce, broil the ribs in the oven for 5 minutes or so at 400-450 degrees or on your broiler setting. 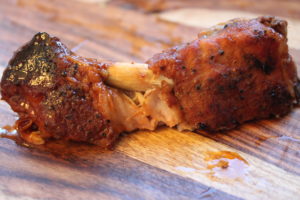 The meat on my ribs was so tender that I couldn’t keep it on the bone! 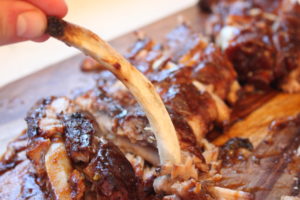 I tried to get a snazzy picture to impress ya’ll, but it kept falling right off. I guess that’s a good thing, right? 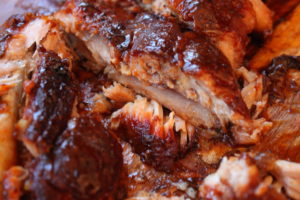 These baby-back ribs were finger-lickin’ good! My husband ate more than half the rack himself and STILL wanted more! Dan is a big rib fan and can be a little picky when it comes to his meat. But his comment about these ribs was that they could only be better if they were slow-smoked in a smokehouse for 24 hours over hickory or mesquite wood. Well, well, aren’t we the little rib connoisseur? Since I don’t have that option (though Dan is probably drawing up plans on how to build his own smokehouse, being the engineer that he is), the Crockpot is the next best, and easiest thing!

I served these baby-back ribs with roasted parmesan red potatoes and steamed green beans. But if I were to make these for friends or at a BBQ, I would accompany them with my 3 Cheese Baked Macaroni and Cheese or my Shredded Hashbrown Cheesy Potatoes. They would also go well with Oven Roasted Brussel Sprouts or Apple, Broccoli, and Horseradish Slaw. And don’t forget Traditional Fluffy Yeast Rolls to sop up all the extra sauce! 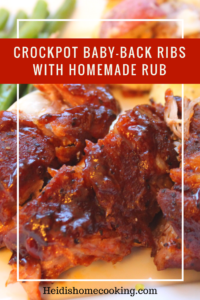 Ribs go with pretty much everything, right? Besides, you can’t be fancy with ribs…nor does anybody want to be! Go ahead and pin this picture so you can reference it later. Happy Cooking ya’ll! 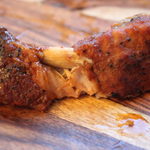 These baby-back ribs are a cinch to make! Even though they are made in the Crockpot, there is no sacrifice on flavor! The meat is so tender it falls of the bone and the homemade rub keeps you licking your fingers until the last drop.
Prep Time5 mins
Cook Time7 hrs
Total Time7 hrs 5 mins
Course: Entree
Cuisine: American
Servings: 6 -8
Author: Heidi Davison