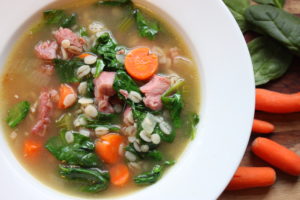 Do you have a lot of ham leftover from Easter Sunday? How about a thick ham bone that you know must be good for something other than a chew toy for the dog? Do you feel like something healthy after all that Easter candy? If you answered yes to any of these questions, then you’ll want to try this Healthy Ham and Barley Soup. It is full of flavor and vegetables to boot! It is an easy and budget friendly way to make a simple but delicious dinner or several individual prepped lunches. 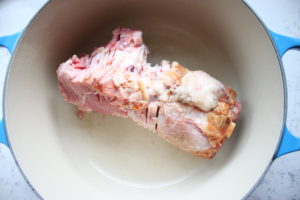 If you are just going to use leftover ham chunks from your Easter ham and use broth from a can, skip this part and move to the next step.

Start by putting the ham bone into a large pot. Cover the bone with chicken broth, vegetable broth, or water and heat it to boiling. I used a combination of chicken broth and water because I wanted the depth of flavor from the broth but I didn’t want it overly salty. You could also use reduced sodium chicken broth. Once the broth is boiling, let the ham bone simmer in the liquid for about 30 minutes or until the meat starts to fall off the bone. Gently scrape the meat from the bone into the liquid and remove the bone. Turn off the heat and let this sit for awhile. 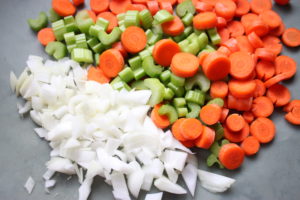 On a cutting board, dice a cup of each: onions, celery, and carrots. I think I used 2-3 stalks of celery and carrots to measure about a cup. Heat a tablespoon of light olive oil in a large pot and saute the vegetables until they are tender. This will probably take about 5-7 minutes. Stir in a tablespoon of minced garlic, a teaspoon of Kosher salt, and 1/2 teaspoon of freshly ground black pepper. Stir this for about a minute more.

*If you want to kick this soup up a notch, try adding a tablespoon of Creole or Cajun seasoning while sauteing the vegetables.* 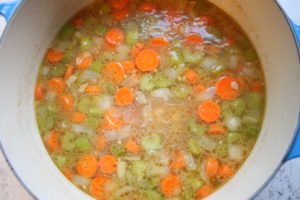 Add a 32 oz container of chicken broth to the vegetables and heat it until it boils. If you made a broth from your ham bone like I did, transfer your broth with any chunks of ham in it. 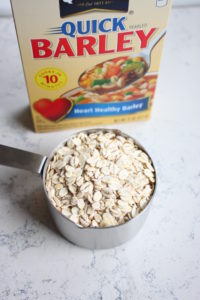 Once the liquid is boiling, add in a cup of quick-cooking barley. Make sure it is the quick-cooking barley or it will not cook completely before your vegetables begin to disintegrate. Did you know that barley is a whole grain and responsible for reducing blood pressure issues, reducing odds of cancer, and keeping your heart healthy? It also helps build and maintain bone structure. Barley also helps reduce inflammation and keeps you full longer because it has lots of fiber. Just a FYI; I always like to know what I’m eating. 🙂

Stir the ham and barley soup and reduce the heat to medium-low. Let it simmer for about 8 to 10 minutes or until the barley is tender. 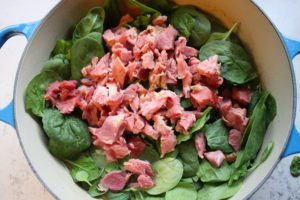 Add in an 8 oz package of fresh spinach and a cup of diced ham. I threw in all the ham leftovers I had so it was a little more than a cup. But measurements in soup are really flexible, so this just made for an extra chunky ham and barley soup. Stir it until the spinach wilts and the ham is heated through. This step will probably only take a minute or two. 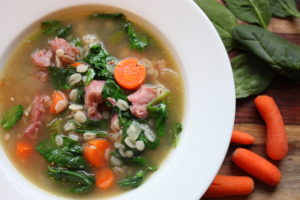 While the ham and barley soup is still warm, ladle it into wide rimmed bowls. Top with a sprinkling of fresh parsley or even bacon bits if you have them. 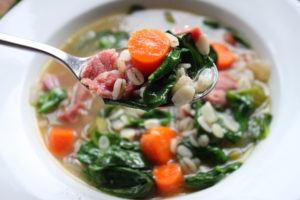 I love this recipe because it is a hearty soup but healthy at the same time. I don’t feel guilty going back for seconds and I feel proud about not wasting leftover ham from the holiday. My husband liked this soup so much that he took it to work the next day and ate it cold for lunch. Why he doesn’t take the extra 2 minutes to walk to the microwave and heat his lunch, I have no idea. It must be a man thing. But that he liked it enough to take it for lunch a second day tells me that this ham and barley soup recipe is a keeper in our house. 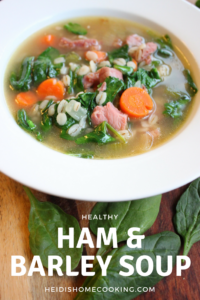 If you’re thinking of trying this soup, save this picture to Pinterest or share it on Facebook using the social media icons below. And if you want to check out other ways to use up leftover ham, you may want to check out how to make Ham and Pineapple Pinwheels or Ham and Cannellini Bean Soup. Happy cooking y’all!

To add more spice to this soup, try adding 1 Tbsp of Cajun or Creole seasoning while sauteing the vegetables.
Rate This Delicious Recipe
[Total: 1   Average: 3/5]