How to Cook Spatchcock Chicken 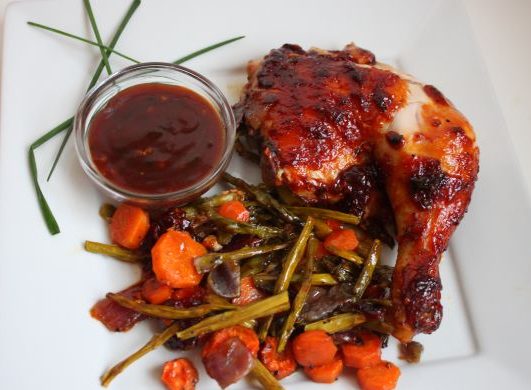 Do you know what Spatchcock Chicken is? I confess I didn't until a couple of years ago. I was watching The Kitchen where they demonstrated all sorts of different ways to cook a whole chicken.

Once I got past the awkwardness of the name and saw how easy it was to cook, I knew I needed to learn how to cook Spatchcock Chicken.

I decided to roast my Spatchcock Chicken in the oven with my homemade BBQ sauce and boy was it amazing! I'm drooling right now just thinking of it!

What is a Spatchcocked Chicken Anyway?

Spatchcock chicken is just another (and slightly awkward!) way of saying you're going to cut the backbone out of a whole chicken and lay it flat to cook.

The reason people like to cook chicken this way is mainly because the chicken cooks quicker and more evenly. It is also easy to season, monitor the crispiness, and baste.

How to Cut a Spatchcock Chicken 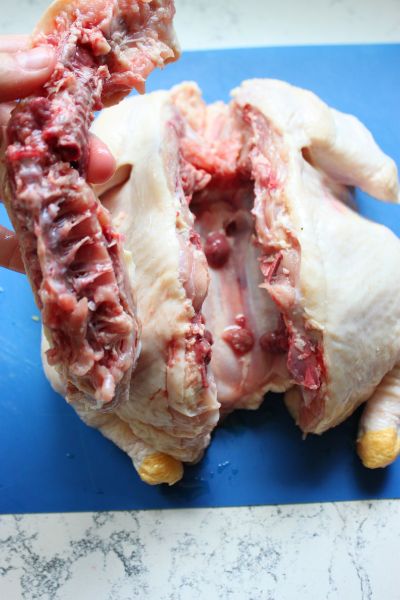 All you have to do to spatchcock a chicken is turn a chicken over, breast side down, and find the backbone. Take a pair of very sharp kitchen shears and cut along the outside of the backbone on both sides.

You're going to have to use your muscles and you'll hear some bone cracking, but the backbone should remove easily so that you can see the inside of the chicken. 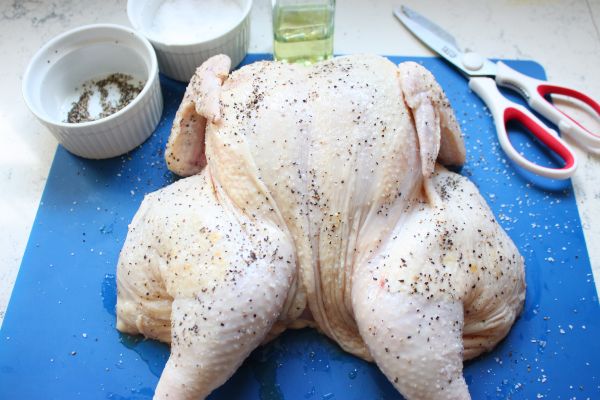 To season the chicken, I like to use a simple rub of olive oil, kosher salt, and freshly ground black pepper. This is especially good to do if you are going to baste the chicken in some other kind of sauce because it doesn't detract from the flavor of your sauce; it only enhances it!

I rub the olive oil all over the skin (even under the wings) and then I generously sprinkle on the salt and pepper. 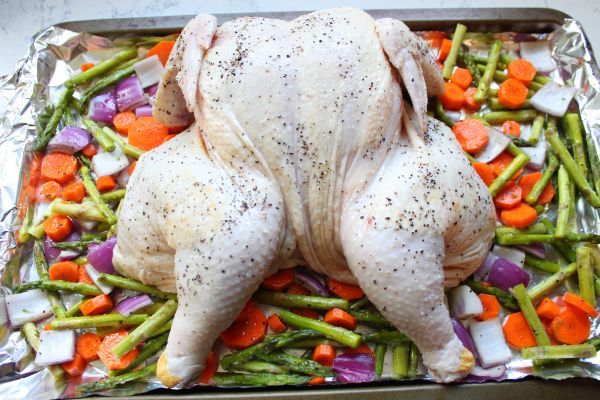 I like to roast vegetables with my spatchcock chicken because it makes a complete dinner for the family with a lot less work for me!

I simply cover a cookie sheet with foil and then layer on root vegetables that have been tossed in olive oil and salt and pepper.The layer of vegetables has a dual purpose as it keeps the spatchcock chicken slightly lifted off the pan.

This allows air underneath so that the roasted chicken will cook quicker and more evenly. 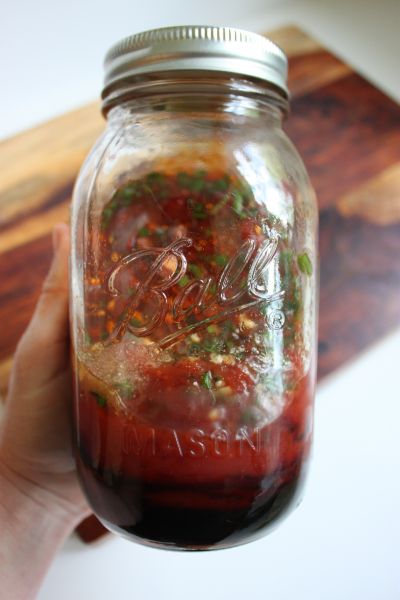 Now what is a baked chicken without BBQ sauce? Boring, in my opinion! I live in the south where it is a sin to not have a finger-licking good BBQ sauce to accompany your grilled chicken.

I make an easy homemade BBQ sauce recipe in a mason jar so that I can shake it all up without making a big mess. Then I can baste my chicken with it or pour it out for dipping.

Then I simply screw the lid back on and keep it in the fridge for up to 7 days!

Here's the BBQ sauce ingredients you will need: 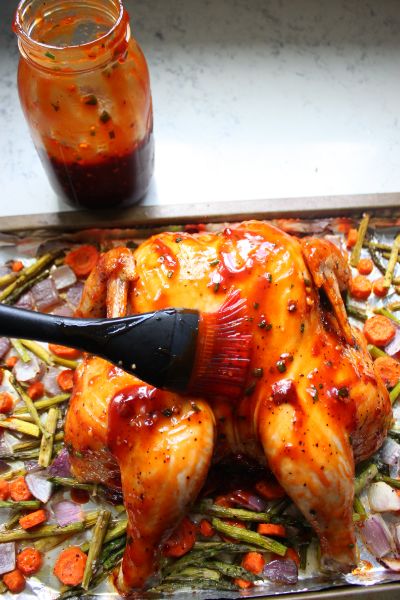 This amazing BBQ sauce can be used in any recipe that calls for BBQ sauce and it tastes eons better than anything in a bottle!

I used it to baste my spatchcock chicken. I used a basting brush to smother all that spicy sweet sauce in every crevice of the chicken.

You could also use this BBQ sauce in my amazing Crockpot Baby-Back Ribs recipe! Not only is the sauce amazing, it complements the ribs PERFECTLY!

How to Bake a Spachcocked Chicken 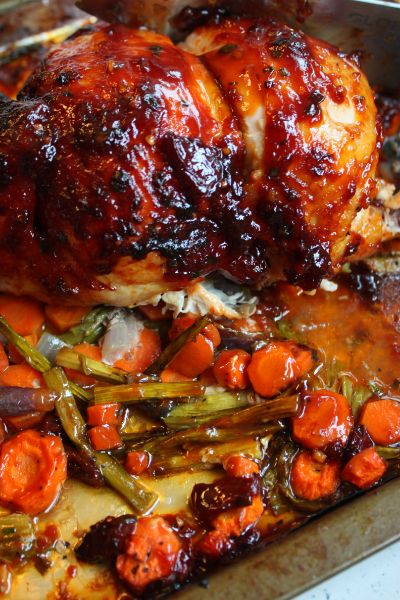 You will need to heat the oven to 425 degrees and then bake the spatchcock chicken and vegetables for 25 minutes. Once the first 25 minutes are done, remove the chicken and baste it with more BBQ sauce every 10 minutes.

This ensures that the meat stays moist and flavorful.

You will probably need to do this 3 or 4 times (or 30 to 40 minutes), depending on how large your chicken is.

You will know the chicken is done when a meat thermometer reads 165 degrees in the thickest part of the breast meat.

Once the chicken is done cooking, let it cool on the counter for 10 to 15 minutes. After that, the chicken should be cool enough for you to cut.

Use a sharp knife to cut the two thighs/legs off. You can separate these two pieces if you like. Then use the knife to remove each wing and then finally the breast meat. Everything should fit beautifully onto a platter if you would like to present it all at once.

My spatchcock chicken didn't make it to the table. I had great intentions for it but before I could get the breast meat off, my sister came over. She hovered over the chicken gobbling it up while it was still hot.

She ended up eating the whole thing! She is growing my niece inside her belly so I couldn't judge her too badly! ;-)​​​​ 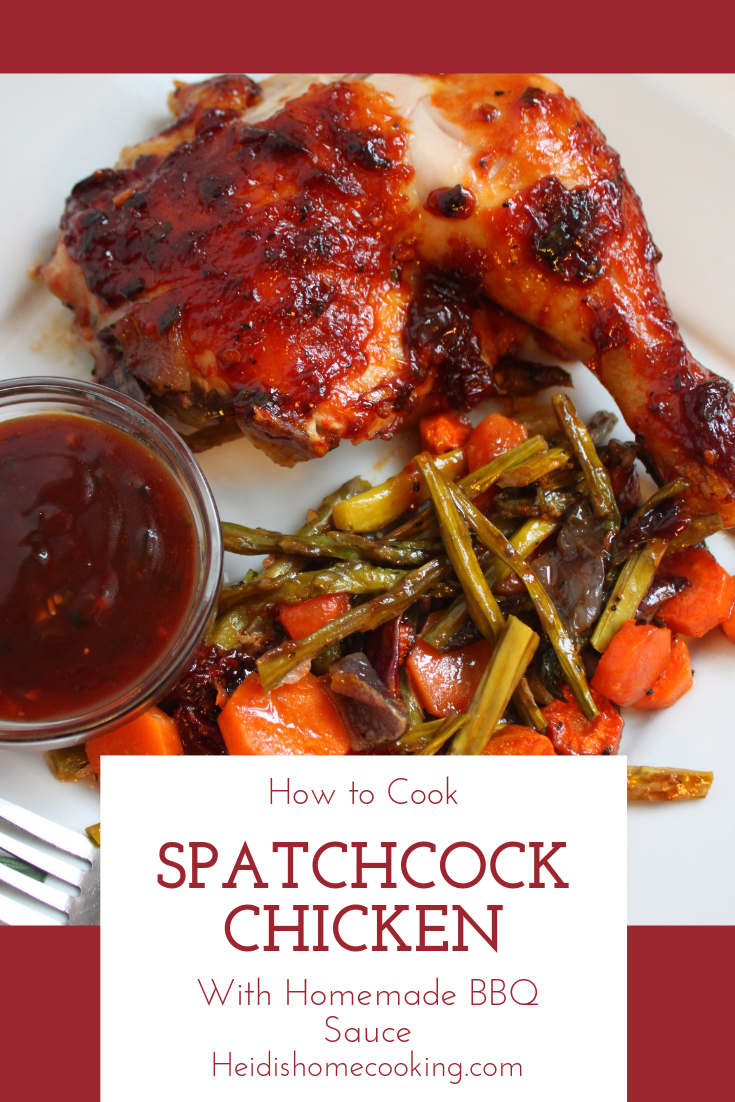 If you love cooking chicken for dinner like me, you may also enjoy my 30 Minute Chicken and Black Bean Fajitas or my One Pan Lemon Parmesan Chicken.

P.S. If you enjoyed this recipe, or you have any questions, drop me a line in the comment section! Happy cooking y'all!

This recipe explains how to remove the backbone from the chicken for easy cooking and then how to make a delicious BBQ sauce to baste it in.
Print Recipe Pin Recipe
Prep Time 1 hr 20 mins
Servings 6

To Spatchcock the Chicken

To Make the BBQ Sauce

12 Easy Dinners with 6 Ingredients or Less