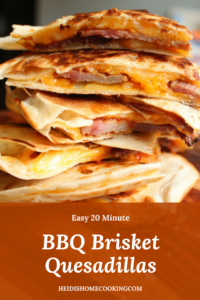 Sometimes the best recipes are born by accident. That’s how these BBQ Brisket Quesadillas happened. Originally, I intended to make sandwiches with the leftover brisket meat I had in the fridge. But being the busy, overcommitted, and sometimes frazzled mom that I am, I realized I didn’t have any bread or mozzarella cheese. But I did have tortillas and colby jack…thus the quesadilla idea was born. It was quite the unexpected surprise because, before I knew it, they were gone. And I am unashamedly admitting that I ate an entire one myself… 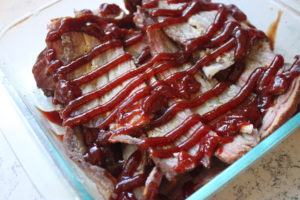 This brisket was leftover from HoneyBaked Ham. My husband got one of those coupons for a free ham or brisket for Easter. We chose the brisket and kept it in the freezer until a few weeks ago when we cooked it for a special Sunday dinner. You could also make these quesadillas with any kind of leftover steak, carne asada, chicken, etc. If you really want to try the brisket flavor and don’t have any leftovers, you can find sliced versions like Jack Daniel’s sliced Beef Brisket in the grocery store.

I took the leftover brisket and smothered it in my favorite BBQ sauce. Maybe you have a local brand that’s your favorite, but I always reach for Sweet Baby Ray’s because it is delicious and cheap! And when I say smother, I mean get down in it with your hands and make sure that brisket is dripping in sauce! Sweet Baby Ray’s has all sorts of flavors like the 4 pack listed here. 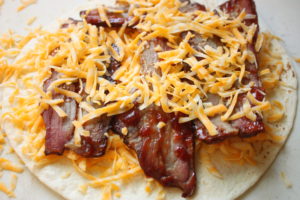 Then take 3 or 4 pieces and put it in a burrito-sized tortilla between 2 layers of Colby Jack cheese. 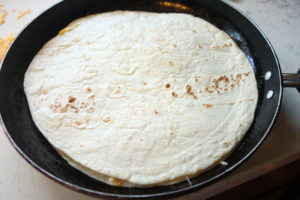 Spray a large saute pan with cooking spray and then transfer the tortilla inside. Top it with another tortilla and spray on some more cooking oil. 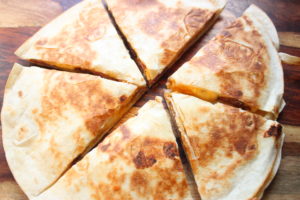 Cook over low to medium heat so the BBQ brisket quesadillas don’t burn. Quesadillas have a tendency to go from nicely browned to crispy charcoal in about 3 seconds, so keep an eye out. Flip it when it is browned to your preference and do the same thing on the other side. When you can see the cheese has just begun melting, pull the quesadilla out and let it sit a few minutes. Cut it after it has had a few minutes to cool so the cheese doesn’t run out. 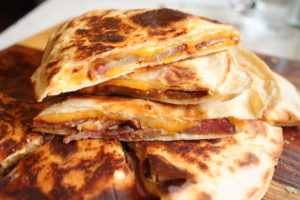 Now pile them onto a plate and watch them disappear! Seriously, these things go fast! My hubby and 3 kids scarfed them down in about 3 minutes. 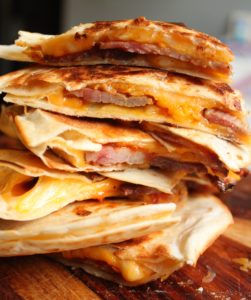 Pretty good for leftovers, right? I’d say so. If you’re in need of other quick dinner ideas you may like to try these Chicken Fajita Roll Ups or this Ginger Chicken Stir-fry. Both take no longer than 20 minutes. And if you need more ideas than that, follow my 20 minute meal board on Pinterest just a few scrolls below. Happy cooking ya’ll! 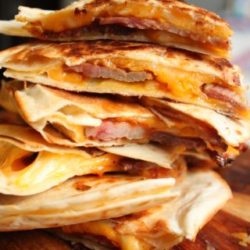