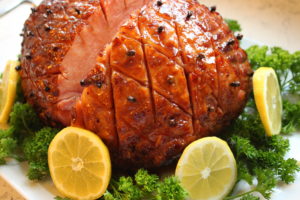 Isn’t this glazed ham a beauty? Sometimes large pieces of meat, especially those intended for holidays, can be a bit intimidating. I was timid about making my first Easter ham two years ago, but I found a simple, fairly straight forward recipe from The Pioneer Woman that I felt bold enough to try. Sure enough, it was pretty easy and I didn’t mess it up! In fact, one of my guests said it was the best ham he had ever eaten! So I made the same glazed ham this year but have tweaked the recipe just a bit. If you think putting a pretty thing like this on the table for Easter is out of reach, think again! It really is super easy and I’ll walk you through it right now: 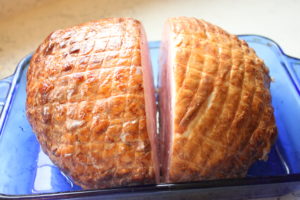 Go to the store and buy 1 large bone-in ham (8-12 lbs) or 2 boneless half hams. Some stores only carry certain kinds so you may have to do a bit of looking if you have your heart set on one or the other. My grocery store only had half hams, so I got two of those. If your family is small, you will obviously only need one. Whatever ham you get, make sure it is uncut so that you can make the pretty design yourself. 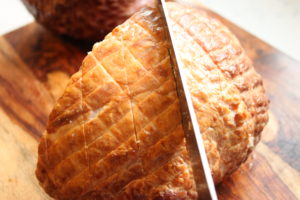 With a Chef’s knife or long serrated knife (I used a bread knife to get extra traction on the meat), make diagonal cuts along the ham. Sink the knife in about 1/2 inch so the glaze can drip inside and moisten the meat. 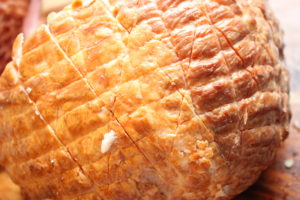 Then turn the ham and make diagonal cuts in the other direction. You want to make pretty diamond shapes. 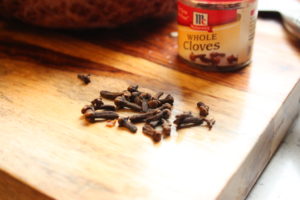 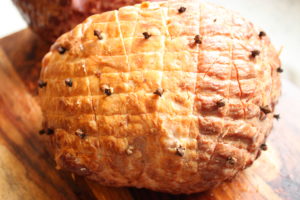 Poke them inside the middle of each diamond shape until the whole ham is covered. The cloves may add a twinge of flavor, but it’s really the aesthetic value we’re looking for. 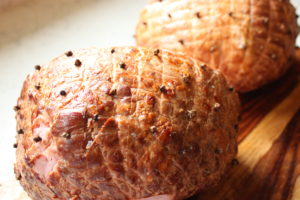 Now grab a roasting pan or large glass pan (if the ham will fit) and put the ham inside. You want to keep the ham sitting in it’s juices so it doesn’t dry out. 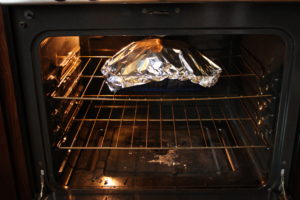 Now cover it with foil and cook at 300-325 degrees, 15 minutes per pound. My ham was 10 pounds so that’s…wait…2.5 hours, right? Who knew cooking had so much math?! If you get confused, you can also follow the cooking instructions on the ham’s package. Just remember “low and slow” because you don’t want to dry out the meat. 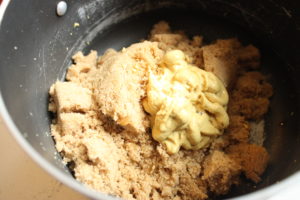 While the ham is cooking, you’ll want to get to work on the Coca-Cola glaze. This is the best part of the whole recipe and what is going to give the ham that nice glossy shine. Get a medium sized sauce pan and fill it with 1.5 cups of brown sugar, 1.5 tablespoons of apple cider vinegar, and 1/3 cup of Dijon mustard. (If your ham is more than 12 lbs you will want to double this recipe). 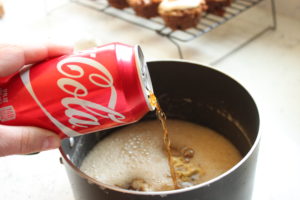 Pour in half a can of Coca-Cola. The Pioneer Woman uses Dr. Pepper which is also wonderful. Really, you could use any kind of dark soda here as long as it isn’t diet. You need the sugar from the soda to make the glaze. 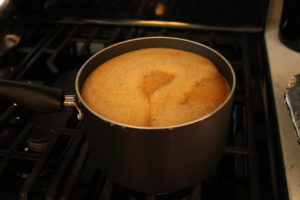 Over medium heat, whisk the mixture until it gets foamy and then immediately reduce the heat to low and let it simmer for about 20-25 minutes. You’ll see it begin to thicken over time and once removed from the heat it will thicken even more. 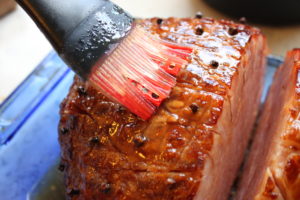 After the first hour of bake time you’ll begin your glaze work. Every 20 minutes, pull out the ham and brush the glaze into the cracks. It may seem labor intensive to do this 4-6 times, but I assure you, it makes a big difference when you slice the ham later on. 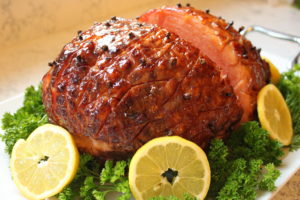 Save a little bit of the glaze for the very end when you are ready to serve the ham so it will be stunningly shiny! Put fresh parsley and a cut lemon on the platter and your ham looks like it just stepped out of a cookbook!

You could also pre-cut the ham for your guests and brush some of the glaze in between each piece of meat. I think either way looks gorgeous! 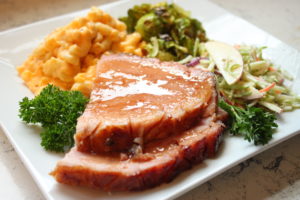 I served my glazed ham with 3 Cheese Baked Macaroni and Cheese, Oven Roasted Brussel Sprouts, and Apple Broccoli Slaw. For dessert we had a choice of Creamy Pistachio & Coconut Pudding Cake or Carrot and Raisin Cream Cheese Cupcakes. 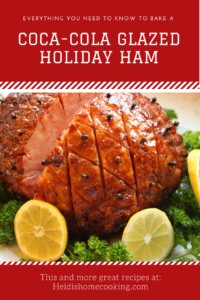 So what is on your Easter menu? Are you the hostess or are you traveling for the special day? I would love to hear all about your traditional Easter dishes! I hope ya’ll have a blessed holiday! 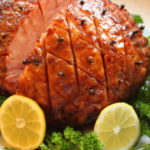 *If your ham is more than 12 lbs, double the glaze recipe.Recipe is adapted from The Pioneer Woman.
0
Shares

